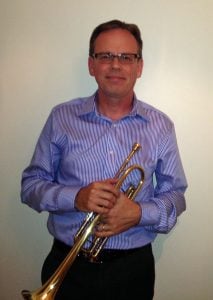 Hello everyone, if you don’t know me my name is Paul. I’m going to speak for a few minutes and tell you a bit about myself and my faith, concentrating on my teenage years.

I had a fairly ‘sheltered’ childhood, growing up in a village called Wick near Bristol. As a family we regularly went to the local Parish church, I found it pretty boring to be honest. I attended confirmation classes, but as a child/young teenager I didn’t really get it and only went to church because I had too. I think I was a fairly decent sort of chap as far as the average teenage boy goes, but my sister seemed to find me a bit annoying and my pranks were a possibly a bit cruel- maybe I’ll let you judge yourselves in a moment.

I left school at 16 and joined the Army as a musician and served for 12 years. It was almost a random choice, but I enjoyed playing the cornet and had done quite well in competitions and it seemed like a way of getting paid for what I enjoyed most. I was also very keen to leave home and get away from my irritating family.
Clearly there was a lot of fun to be had, but of course the Army can be a harsh environment for anyone, particularly for a 16 year old. 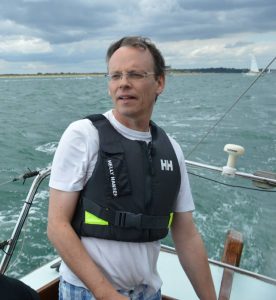 Before I was 18, I had had to deal with some big stuff and was struggling. Some of my friends had been killed in a terrorists incident, I’d started to dabble in heavy drinking and I’d also taken out a loan to buy a car which I couldn’t really afford.

However the biggest problem was that I had been posted to Germany into a new band where I didn’t really fit, and I had been made to feel that I didn’t fit. At 18, I was desperately homesick, finding my family irritating was a distant memory and I sought anything that resembled or reminded me of home.

It was about this time that I was invited to the Garrison Church by a member of the band, a particularly annoying member of the band to be honest. Simon from Belfast (predictably nick named Paddy). Paddy was not your average serviceman, he was a bit moody, tense and at times a little selfish. I shared a room with Paddy and sometimes would need to go for a drive just to get away for a bit, however this is the guy who helped lead me to Jesus for which I am very grateful.

Now is your chance to judge whether I have a cruel streak or I’m just your average prankster.
Paddy had a set routine at bedtime and was an easy target for attack. One evening when he was out of the room doing his ablutions, I hid under his bed (having built a fake sleeping figure in my bed). He came into the room turned off the light and got into bed. As he dropped off to sleep, I stretched my arms up around the narrow army bed and pulled his body down as he screamed. I’m not sure that this little joke had helped his bad nerves. So then, am I cruel or just an average prankster having a bit of fun? 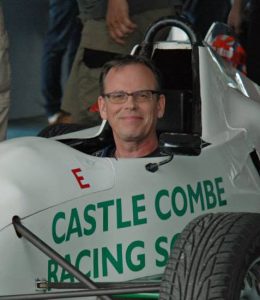 Ok, maybe I shouldn’t tell you about ‘Bod and his laxative treat just before the Queen’s Birthday Parade’, or ‘Hair really is flammable experiment’.

Back to the Garrison Church, it was a very welcoming family atmosphere, just like church back home – the home that I now missed. One evening, the Padre gave his own testimony and presented the Gospel message in a refreshingly straightforward way, following which he invited people to ask Jesus into their hearts. I did.
The message went something like this:

God will forgive our sins and will give us eternal life with Him in Heaven, all we need to do is to sincerely invite Jesus into our hearts and work with him in sorting out things in our life which are not good and harmful to us.
You may be familiar with the following reference from St John which gives the same message
“For God so loved the world that He gave His only begotten Son, that whoever believes in Him should not perish but have everlasting life”.

If I told you that life has been easy since that evening in 1984, I wouldn’t be telling you the truth, if any of you here have experienced marriage failure, debt or depression, I can empathise with you. 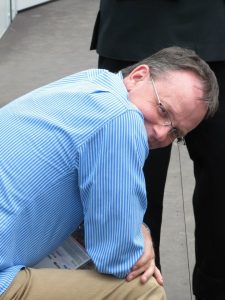 But what I can tell you is this, I feel certain that he has always protected me and I have always felt ‘accompanied’ as you would if you always had a good friend by your side. A sort of friend or partner that would nudge you if they saw you heading in the wrong direction or maybe encourage you to achieve good things that you are well able to do but lack confidence. I also see Jesus as a friend that can have a bit of fun with you and play with you a bit at times too, as well as performing the extraordinary as if it were ordinary.

I’m not sure where I would be, what I would be, or indeed even if I would be alive, if it were not for his almighty care for me over the past 30 or so years. I am also particularly thankful to him for bringing Maria into my life….and you aren’t a bad bunch either.

If you are not certain that you know Jesus personally, I would urge you to have a conversation with him this evening.

Ask him to reveal his love to you and give some real consideration into responding to the Gospel invitation.
Don’t expect him to respond in a booming deep voice in the middle of the night and for sure he won’t be hiding under your bed. Expect him to express himself in much more subtle ways, possibly in others around you.