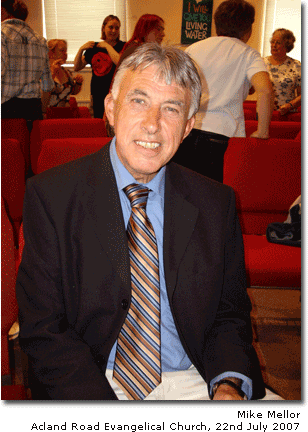 As a fun-loving teenager, I would never have dreamt that I would have become an alcoholic in my twenties. But, become one I did.

Leaving school at seventeen, I started work on a Bournemouth newspaper. Alongside this, I worked in various bands as a musician. Between these two career paths, I drifted, as time passed, into a pattern of increasingly heavy drinking.

In one of the bands in which I played, I fell for the lovely girl singer. We settled down and in time a family came along. However it was the ‘settling down’ that I struggled with and refused to do. I gravitated towards heavy drinkers in both the newspaper and the music worlds and became increasingly selfish and reckless.

Things took a turn for the worse when my wife and I went separate ways musically –she singing in the resident band in the Bournemouth Pavilion, whilst I worked as a freelance playing various theatres, clubs, functions, QE2 cruises etc.

The drink began to have more serious effects as night after a night I would literally fall into my car and somehow weave my way home. Eventually I was banned for drunken driving, yet on regaining my licence continued even more recklessly than before.

Tragically, everyone could see what a ‘pain’ I was except myself. I was constantly letting everyone down – wife, children, work colleagues not to mention myself. The whole of ‘today’ was taken up with apologising for the previous day. It was a case of ‘Jekyll and Hyde’ – “Mike’s OK when sober, but watch out when he’s drunk!”

The ‘crunch’ came when I had been on a three-day binge and when seeking to drive home collided with a car and failed to stop, hit another parked car, but again kept on going. The police were informed, and another court case was on the way. By this time I knew that I was running out of steam. I don’t know exactly when I crossed the line from being a heavy drinker to an alcoholic, but cross it I did. I awoke each morning with a deep feeling of doom within, yet was prepared not only to live, but also to die for drink.
People said, “Change!” The problem was, ‘how!’ and, ‘to what?’ The main problem was the lifestyle – I loved being drunk and being with other drunks.

Meanwhile, God was at work, and I had no idea. A young man came to work on the newspaper, and his desk was slotted in right next to mine. There couldn’t have been a greater contrast! This bright, cheerful young man next to a dishevelled blurry-eyed ‘thing’. This lad was one of these ‘Christians’, went to church, read the Bible. From time to time, I would hear him discuss the topic with various people, and on one occasion when engaged in conversation with an atheist, I turned to them both and said, “Why don’t you both belt up! You’ll never know there is no God, and you will never know there is a God” And that really was my philosophy. You can never know, what’s the point in even thinking about these things.

However, things worsened, and eventually came to a head. One day (a life-changing day never to be forgotten!) this young chap and myself were alone just chatting. It was a rare, drink-free day and I found myself asking about his faith. Then he asked, “You believe in God don’t you?” “Well, suppose so” I replied, but thought “but how on earth can you know?” Then he asked, “Do you believe in Jesus Christ?” Again, I replied, “Well, I suppose so”, but my mind reasoned, “What’s the possible relevance of this?”

Finally he challenged me, “Why don’t you ask God to forgive your sin, and ask Christ to enter your life and take control?”
To be honest, I didn’t have a clue what he meant, but there was something stirring deep within. I left the room and entered a cubicle in a lavatory, got on my knees and prayed –something very eloquent like “Help, God!” I think! It was enough however to transform my life.

I left the toilet. It was time to go home. I got into the car, but as I drove, broke down in tears of joy. I knew that God was real. I knew that Christ died for my sins and had forgiven me. I knew that if I crashed the car and died now, I would go to heaven. I reached home, flung open the door, and shouted to my wife (who was in the kitchen) “Gwen, I’ve become a Christian!”
She put her head in her hands and sighed, “Oh no! Whatever is he up to now!”

The days passed. I was given a Bible, which I couldn’t put down, it all made such sense now,

“If anyone becomes a Christian, he is a new creation, the old has gone, the new has come”

and then, Jesus said, “You must be born again…”

That is just what had happened, I was a brand new person from the inside-out.

Everyone was talking about it –people both in newspaper and the music worlds, family and friends. “Mike’s got religious mania” they would suggest to Gwen. In spite of her fears, Gwen had to admit, “Well, he’s changed for the better. He’s loving and reliable, he comes home for meals, plays with the kids – and does amazing things, like standing up unaided and talking sense!”

It was three months later that Gwen herself came to experience the joy of knowing Jesus Christ. As a young girl she had heard the story of how Peter the disciple denied Jesus. It was as if Christ asked Gwen, “Why have you denied me?” Gwen searched her heart for some weeks, and felt she could do so no longer and gladly surrendered her life to the One who laid down his life on the cross for her.

Perhaps you don’t have a drink problem, but we all have a sin problem –that is, we seek to live life our way and deny God the rule of our lives, which is His by right. We all, without Christ are addicted to sin and selfishness –it’s just that the degree to which we are addicted varies.
When the love and power of Jesus entered my life that day, there was no competition. What can compete with the joy of knowing and being loved by the One who lovingly made us?

From that wonderful day, it is my deepest desire that all who walk this earth should know Him.